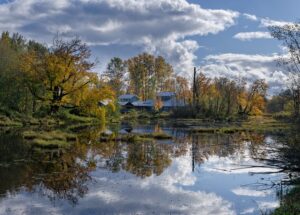 Know Before you Go 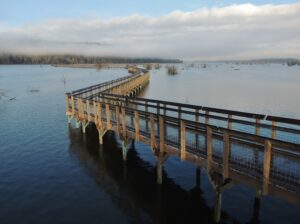 In 1903, President Theodore Roosevelt established the first national Wildlife Refuge. The Refuge System protects some of our country’s most iconic ecosystems and the fish and wildlife that depend upon them.

Billy Frank Jr. Nisqually National Wildlife Refuge conserves over 4,500 acres and was established in 1974 through a grassroots effort led by local community members to protect the critical habitat found where the Nisqually River meets Puget Sound.

The Nisqually Estuary trail is on top of an earthen dike and begins at the north end of the Twin Barns Loop Trail, near the Nisqually River Overlook.

To reach these trails you’ll need to travel one half mile from the parking lot along the Twin Barns Loop Trail. Map and trail descriptions.

Can you find the area where fresh and saltwater mix? The Nisqually Estuary Trail extends for a half-mile, dividing the freshwater wetlands to the south, and to the north the fresh water mixes with the salt water, becoming brackish or slightly salty. Continue to find the boardwalk over the mudflats of the estuary.

What is a mudflat? A mudflat is the muddy land that is left uncovered when the tide is out. The mud may look solid but often is not and can be very dangerous if walked on. 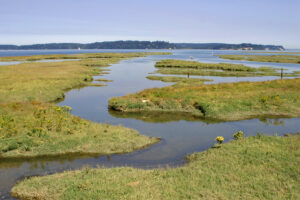 What is an estuary?

An estuary is a place where fresh and salt water meet and mix. The Nisqually Estuary is formed where the freshwater of the Nisqually River meets the saltwater of Puget Sound. Estuaries are often referred to as the “nursery of the seas. The Nisqually estuary is a rich ecosystem and an important nursery ground for many plants, birds and animals, including young salmon!

The estuary is also an important migratory stop for migrating shorebirds in the spring and fall. Some of these birds travel from Alaska all the way to South America every single year! To fuel their incredible journey, they rely on the large quantity of marine worms, invertebrates, and other creatures that live in the mudflats of the estuary.

Can you identify the area where fresh water mixes with the salt water of Puget Sound? 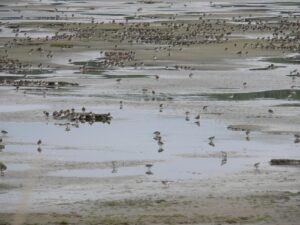 Habitats of the Estuary

The estuary includes several different habitat types and each one supports a variety of different wildlife.

East of the Nisqually Estuary Boardwalk Trail, you’ll find vast expanses of mudflats. These open areas of mud are covered by high tide twice every day and are a very important part of the food chain. Many kinds of invertebrates, or animals without a backbone, live in the mudflats where they provide food for fish and birds. They are especially important for migrating birds as they provide much needed food and the uncovered mudflat provides resting places for birds as they journey over long distances.

Watch as shorebirds hunt along the mudflat finding tasty morsels such as nematodes or marine worms and amphipods which are also called “beach hoppers”.

Have you seen any small holes in the mud where these animals make their homes?

Salt marsh habitat or coastal wetlands can be found to the west and to the north of the Nisqually Estuary Boardwalk Trail.

See if you can find small islands with plants growing out in the mudflats, these are called salt marshes. A good place to detect these islands of salt marsh is from the Medicine Creek Viewing Platform.

Salt marsh are only covered with water during the highest of tides. The plants that grow here can live where salt-water floods them regularly, but not where they may be covered by saltwater all day. Many marine plants can be found on or near the mudflats and salt marshes. Check out this helpful guide to help identify common  marine plants seen in Puget Sound! 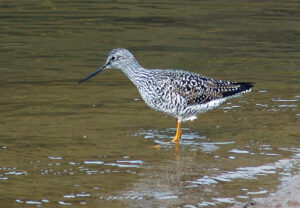 Tides Control the Life of the Estuary

In the estuary, the daily tides shape the habitat. Low tide drains the estuary and uncovers very large mudflats, leaving only narrow channels of deeper water.

When the mudflats are covered with water, fish from the deeper waters of Puget Sound swim into the estuary. Sea ducks, grebes, and other seabirds, such as common murre and rhinoceros auklets may be seen swimming and diving for fish during high tide.

What animals can you detect feeding at low tide? Low tide uncovers a feast for shorebirds, waterfowl, and herons on the mudflat. Shorebirds probe the mud for worms, clams, and ghost shrimp, and the greater yellowlegs and great blue herons wade in shallow pools to capture stranded fish.

To find out more about the tides in the Nisqually Estuary, check out this local tide chart. 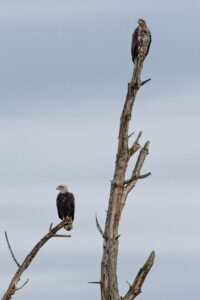 Other Animals You May See Depend on the Estuary

As you walk the boardwalk see if you can spy other animals that make the estuary their home.

Can you solve this puzzle?

What has a large brown body and a brown head when young but when it ages its head turns white? Whose legs and bills are bright yellow and has wings that can stretch to over 6 feet? Look to the sky. Can you see my long wings as I soar above the estuary looking for ducks to eat? Or maybe I am resting on the mudflat digesting my meal or sitting high in the top of a tree. Who am I? I’m a Bald eagle!

Have you seen me? 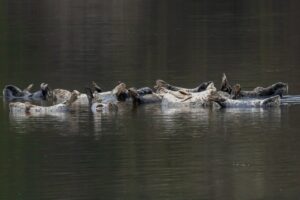 I am a deep diving sea mammal, and I can be found swimming in the estuary at high tide looking for fish to eat. Sometimes you only see my head pop above the water’s surface. My face looks like a dog with its short snout and large dark eyes. I have small ears without flaps and my fur can be silver, tan, or gray with darker spots. I am common to Puget Sound so you can see me wherever there is salt water, as I am a harbor seal!

Another common estuary visitor you may see or hear as they hunt for small fish is the belted kingfisher. Listen for its chattery high pitched call!

Remember, while on the trails, please use headphones when playing bird calls or songs to minimize your impact on wildlife. 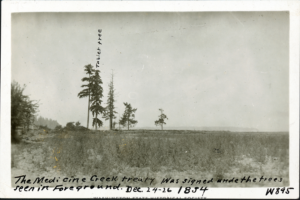 A Creek with Many Names

Just to the west of the Nisqually Estuary Boardwalk trail is a large salmon creek that runs through the Nisqually Estuary. She-Nah-Nam, or Medicine Creek originates from Medicine Springs or also called McAllister Springs, only a few miles upstream from the estuary. When European Settlers arrived, the creek was renamed after an early settler named James McAllister. All three names are presently used to refer to the same creek. The springs at the source of the creek supplied the City of Olympia’s drinking water for over 60 years and in 2016 Medicine Springs was transferred back to the Nisqually Tribe.

What is now commonly mapped as McCallister Creek is an important stream to the Nisqually Tribe who continue to fish these waters for Chinook and chum salmon.

A historic site exists at the mouth of the Medicine Creek on the Refuge. In 1854, the first Native American treaty, the Treaty of Medicine Creek was signed under a Douglas fir tree. This tree represented a historic moment and fell after standing for 153 years in 2007. A short chunk of the tree may still be seen as you enter the refuge. See if you can find it as you leave the refuge before entering the freeway. 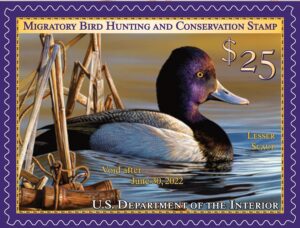 Many kinds of wildlife live in and around estuaries, and so do people! Estuaries are very productive and grow lots of fish. Fish, such as salmon are caught throughout the United States and sold for billions of dollars each year.

Much of the west coast’s estuary habitat has vanished. Many estuaries with their rich soils have been developed into farms. Others have been developed into industrial urban areas with many large buildings and factories. The loss of estuary habitat has negatively impacted or disturbed wildlife habitat and their populations. Making it even more important that these rare habitats are protected and conserved, or saved for wildlife use.

Funding for this purchase was provided through the sale of the Federal Duck Stamp. Stamps need to be purchased by waterfowl (duck and geese) hunters and the money from these sales goes directly to help purchase and protect wetland habitats like estuaries.  Duck stamps have protected 1000’s of acres of important habitat. Allowing us to visit these beautiful, protected places and see the wildlife that call them home! 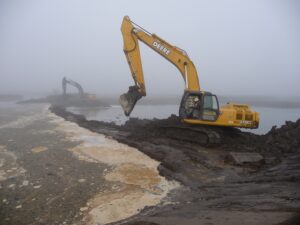 Nisqually Estuary: A Story of Restoration

When the Refuge was established in 1974, the estuary was already a land changed by people. In the early 1900’s a five-and-a-half mile earthen dam or levee was built to keep the saltwater from flooding the land so that it could be farmed. This levee was in place for many years, preventing young salmon from being able to swim into parts of the estuary behind the levee.

In 2008 a team of partners, including the Nisqually Indian Tribe, State and Federal agencies, and nonprofits, worked to remove the old levee, restoring the estuary to its more natural condition. Twenty-one miles of tidal creeks and sloughs were restored, reconnecting 762 acres of estuary habitat for the first time in over 100 years! Salmon could once again return to the estuary to feed and take shelter. 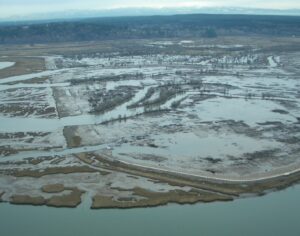 See if you can find evidence of the new estuary areas. The area is wilder today than it once was with larger mudflats and salt water tolerant plants growing. Hint: The boardwalk passes through a large portion of the restoration area. Look all around and you will see the area where the estuary has grown!

Want to learn more? Check out this 10 minute Rivers and Tides: Restoring the Nisqually Estuary – YouTube video that follows the restoration project.

You have completed your mission to locate and photograph salt marsh habitat or an animal that uses the estuary during your visit to Billy Frank Jr. Nisqually National Wildlife Refuge. Don’t forget to login to the Goose Chase App and submit your photo for this mission to collect your park specific sticker!