Welcome to Bats of the Pacific Northwest—What’s Up with Bats Blog!

Do you know what bats and dolphins have in common?
They both use echolocation! Bats use their ears to listen for the echo, or the reflected sounds of an object, to navigate their way and find food.

Local bat expert, Greg Falxa, talks about the various local  bat species and their adaptations for the habitat they live in.

Follow us here for more recordings and interesting facts about our local bats and how water quality affects bat health!

Bats feed using echolocation. The sounds they emit cannot usually be heard by the human ear so we use a bat detector that is able to decipher their sounds.  On July 7th we went out to record which bats we could detect. The Bat Detector picked up silver-haired, Yuma and little brown myotis bats.

All three species feed on insects. The silver-haired feed mostly around the forest edges and the top of the tree canopy whereas the little brown bat prefers skimming over the lake surface.

Where can you see these bats as they arrive to forage at the lake? If you are on the Deschutes Parkway SW on the west side of Capitol Lake look for the 35 mph speed limit sign. If you stand at dusk where the trees block the streetlight you may see bats arriving to forage at the lake and over the lake.

Below we are sharing a few video resources to learn more about bats!

The truth About Bats Documentary
Bats are some of the world’s most misunderstood mammals. Despite the direct benefits bats bring to society (by pollinating plants, dispersing seeds, and controlling pest populations) bats are often villainized in myths. “We have a serious problem because of gross exaggeration of fear of bats…people will not protect what they fear.’

This is one of the the reasons we (Stream Team) do education on bats and other misunderstood species.

High-Speed Footage of a Bat in Flight

The Dangerous Consequence of Losing Millions of Bats

Actually, this is going to be about bat echolocation. Bat researchers no longer have to catch bats in nets to determine which kind of bats are flying around them in the dark. Bats send out ultrasonic chirps when they fly, using the weak returning echoes from objects around them to navigate and locate insects to feed on. Each species of bat has a different sound, or voice common to that species but different from the other species.

Lucky for bat researchers and wildlife biologists, bats are continuously sending out 5 to 15 of these pulses of sound whenever they are flying. Over the past 20 years, the equipment used to record these ultrasonic bat calls has advanced to the point that we have handheld “bat detectors” and software programs can analyze and identify the species of bat based solely on the echolocation call.

There’s even a smartphone plugin module for called the EchoMeter 2 that can record a passing bat, play the sound through the phone’s speaker, record the call, and give a guess of which species of bat it is.

Some sonogram images of the species of bat found in the south Puget Sound area can be viewed here. 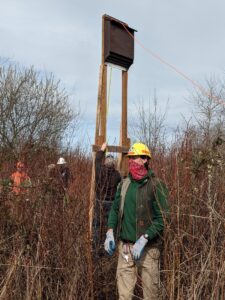 The box is multichambered with slats approximately a half inch apart. The bats enjoy being cozy and crowd together to keep warm. Most of these small bats only weigh 4 grams, the weight of a nickel, so many can crowd together inside. This box will provide much needed resting and housing for hundreds of bats that fly between Woodard Bay and Capitol Lake each night during summer. Most of the bats feeding around the lake in summer are lactating females that make the long journey twice in a night when nursing young pups. 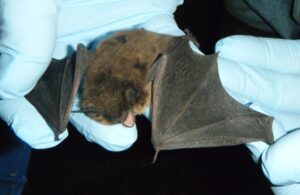 Springtime – warmer days, budding flowers and… the return of our bats! Mind you, throughout the winter months I regularly record, and sometimes see, two species of bats which don’t hibernate but rather snack their way through the winter. These are the silver-haired bats and California myotis bats which are the exception. The other 7 species found in this area are absent in the Puget Sound area from October until sometime in March or April. A species list with information on each species can be found at http://batsaboutourtown.com.

Where I live, not far from Burfoot Park, I’ve heard on my bat detector (yes, there are such things) the echolocation calls from Townsend’s big-eared bat, Western long-eared bat, little brown bat, Yuma Myotis bat, hoary bat, big brown bat and our year-round California Myotis and silver-haired bats. If I went and listened near a forested area like Capitol Forest, I’d certainly pick up the last 2 species, the long-legged bat and the fringed bat. 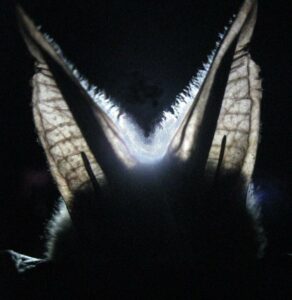 The different species don’t all return at the same time – the Yuma bats tend to arrive a couple weeks earlier in March than the little brown bats. Though they both hunt and roost in the same places and have their pups around the same time (the first couple weeks of June). We don’t know if that means that the little browns are hibernating farther away or if they just take their time travelling back to their summer hangouts. The long-legged bat seems to show up much later than the other species and give birth to their pups later as well.

There are still a lot of mysteries surrounding these hard to study animals. They are too small for GPS trackers, they move around at night, and they can travel long distances in one night. Hopefully, we will someday have more information on where they hibernate, which will help us figure out some of the answers about how they get here and other “secrets” they might do along the way.

Stay tuned for more bat updates through the spring and summer!