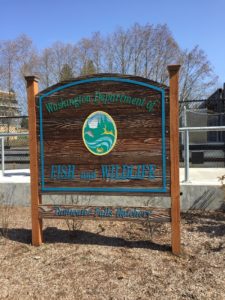 To photograph one of the fish ladders along the river trail and send it to us. Historically, it is believed that salmon were not able to use the upper Deschutes River for spawning because they could not migrate past the steep falls.

Brewery Park at Tumwater Falls is a 15-acre gem on the lower Deschutes River where Chinook salmon can be seen returning to spawn each fall.

In the 1950s, juvenile salmon from the Green River hatchery were introduced into the Deschutes River. Concrete fish ladders were then built to help returning adults navigate the lower, middle, and upper falls on their return trip. Today Deschutes River Chinook are part of a “artificial salmon run” hatchery program.

The program successfully continues to increase the numbers of Chinook salmon, providing a food source for Orca whales and salmon for commercial, recreational and treaty fishing.

In 2021, an upper falls construction project was completed that added new fish ladder viewing windows, raceways and an upgraded egg-taking facility. In September and October, you can have an eye-level view of Chinook salmon coming home from their 3 and 4-year journeys to Alaska and back.

Can you name the stages of the Pacific salmon’s life cycle?

To learn more, check out this wild Salmon spawning video!

KNOW BEFORE YOU GO!
Print this handy mission checklist before you leave! 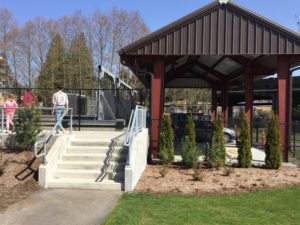 From the parking lot, find the new egg taking facility. Go up the steps next to the entrance sign. On your right, will be the new egg-taking facility which operates in September and October. Along the railed walkway you’ll see the long narrow ponds called raceways that are used for rearing young salmon.

What time of year will you need to visit to see adult salmon?  The best time to view adult salmon is in the fall, September – October!

In the fall, after coming up the last fish ladder, adult salmon enter the raceways, which are seasonally used as holding ponds to gather the fish for the egg-taking operation. During this time, Washington State Fish &Wildlife personnel remove the eggs from the females, fertilize the eggs with milt from the males, and send the eggs to a nearby hatchery. The fertilized eggs will develop and hatch out as egg sac fry. After the fry reach a certain size they will be transported back to the Deschutes hatchery. The juvenile salmon fry will be placed in the raceways’ rearing ponds, where they are fed and later released back into the river to begin their journey to the ocean. Some will travel as far as Alaska!

Before being released, the young salmon in the rearing ponds will “imprint” on the smells of the Deschutes River waters so that they can return back to this same location as adults ready to spawn. During this time their bodies also change preparing them to live in salt water. This process is call smoltification.

Have you seen any juvenile salmon with silver scales? If so, they are ready to go to the ocean!

Find the viewing windows down the steps and to your right. Did you see any Chinook salmon?

The fall hatchery salmon run consists primarily of Chinook, coho salmon and steelhead. Occasionally, other species may be found straying into the river.

Can you name the 5 species of Pacific salmon? Remember, the five-finger method can help you!

Check out this link https://wildsalmoncenter.org/salmon-species/ to see the differences between the five species of Pacific salmon. 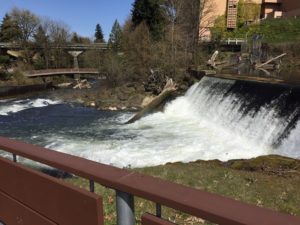 Over the Upper Fish Ladder

Continue down the trail and find the grated walkway.

What is below? The upper fish ladder!

Do you see the fish ladder with its many steps through the grate? This fish ladder was built to provide passage around the steep falls. A series of “steps” were added so that adult salmon can easily swim and leap up and over the ladder to reach their destination. 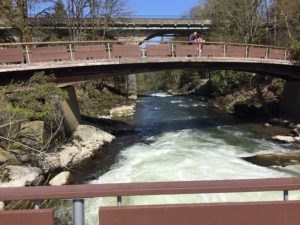 End of the Grated Walkway

When you reach the very end of the grated walkway, you will be standing over the entrance to the fish ladder.

Can you see the Deschutes River tumbling northward?

Over the centuries, the northward tumbling river has carved out a channel exposing much of the basalt rock that underlies parts of Thurston County.

View from the Bridge

Continue onto the gravel path up and around onto the bridge. Looking back, can you locate the opening to the upper fish ladder?  Cross the bridge and turn left to continue the loop trail along the Deschutes River.

Notice the trees and shrubs along the riverbanks. They are very important in keeping the stream cool for salmon. Their roots also help slow down the force of the water and help reduce erosion. Trees and salmon need each other!

In September and October, this is a good viewing point to watch adult salmon trying to leap up the water fall before they  find the entrance to the fish ladder. 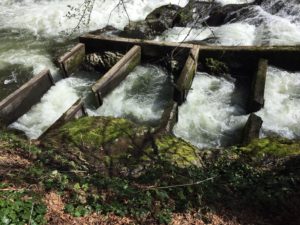 As you walk along the river, you’ll pass under two bridges. When you reach the second bridge, you will see the “middle falls,” which are less steep than the upper falls. The middle falls is a fast cascade of water over large rocks. It  is also a barrier to the salmon’s homeward migration.

Can you locate the open concrete fish ladder? 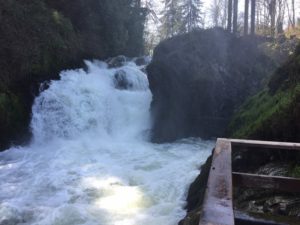 Continue down the trail and onto the wooden bridge. Can you spy the lower falls and the lower fish ladder?

At the end of the bridge, turn right and continue down the steps to the lowest platform. Beware! Steps may be slippery from the mist of the falls.

Do you feel the mist from the falls?

From the platform, look back at the lower falls. Can you locate the entrance to the lower fish ladder? Did you see salmon jumping into the falls? 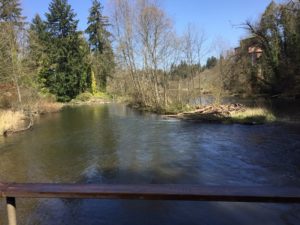 From the platform, can you find Capitol Lake?

This freshwater lake was formed when the 5th Avenue dam was built in the early 1900’s to form a “reflecting pond” for the Capitol building.

At the far end of the lake, the water spills into the saltwater inlet of Budd Inlet, which is part of Puget Sound. At the 5th Ave dam there is a small fish ladder that is always open to allow fish to migrate from the inlet into Capitol Lake.

In September and October, you may see returning salmon as they try to spawn in the gravelly areas of Capitol Lake around the viewing platform.

Loop around back to the parking lot.  Several years ago, ivy was removed from the steep banks along the park. The slopes were so steep that contractors had to use ropes for climbing to remove the ivy. Ivy is an invasive plant meaning it will take over and spread, outcompeting the native slower growing plants.

Once the ivy was removed, native plants were replanted providing habitat for wildlife. What wildlife have you seen?

You have completed your mission to photograph one of the fish ladders along the river trail! Don’t forget to login to the Goose Chase App and submit your photo for this mission to collect your park specific sticker!