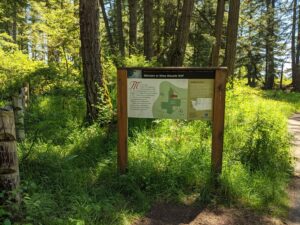 Find a prairie plant such as Garry oak, golden paintbrush, camas, serviceberry or reindeer lichen and send us a photo!

The Mima Mounds Natural Area Preserve was established in 1976 to protect the rare mound landforms and Puget prairie grasslands. The site includes a small Garry oak woodland and savannah, which is defined as an area of widely spaced oak trees with a grass understory.

KNOW BEFORE YOU GO 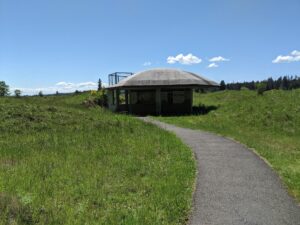 Follow the trail from the parking lot to the concrete kiosk area. From here you can take the half mile North Loop trail or the half mile paved ADA Loop trail. The ADA Loop goes through Douglas fir forest and prairie mounds. The North Loop is a undeveloped trail winding through the mounds. Both are beautiful!

Do you know what a prairie is?

Prairies are a unique ecosystem that are often large consisting of miles of grasslands. Prairies have similar temperate climate, moderate rainfall and few trees.

Most of the prairies located in North America make up the Great Plains and are huge expanses of grassland habitat.

Prairies are one of the rarest ecosystems in Washington State.  Prior to settlement by non-indigenous people in Washington, prairie habitat covered an estimated 180,000 acres of Western Washington. Now only 3% of the original prairies remain.

There are two prairie ecosystems in Western Washington: 1) dry, upland prairie, and 2) wet prairie. The more common upland prairie occurs on deep, gravelly, well-drained glacial soils like Mima Mounds, found in bottomlands and valleys and in the lower foothills.

Wet prairies occur on clay-rich soils that are saturated to the surface during the early part of the growing season and dry out during the summer. Wet prairies in Puget Sound are usually found on glacial outwash soils in swales or other low-gradient wet (flat like) areas.

There is an age-old debate on what has caused the mounds at Mima Mounds Preserve. Some theories involve giant rodents, but the more probable theory has to do with the receding of the glaciers.  Which theory do you support?

Learn more about western Washington prairies and their locations. 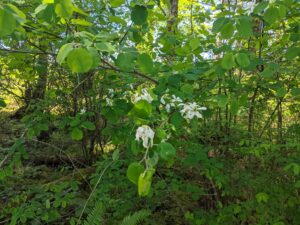 Once the glaciers of the ice age receded plants and trees slowly returned to the land. In the gravely, well drained soils of Puget Sound prairies drought tolerant grasses, flowers and oak trees grew crating prairies.

Over many decades plants growing in a place change. New plant species take the place of those that were there before. This process where one plant gradually replaces another plant community is called plant succession. There are five stages to plant succession beginning with bare soil and lichens that gradually grow small plants and grasses until shrubs and dense forest take over the landscape shading out shade intolerant native plants.

Plant succession causes the entire ecology of the landscape to change, including the microorganisms and animals that use it. This is referred to as ecological succession.

Today, these endangered landscapes continue to be dependent on humans to protect and sustain them.  Management practices include mowing, grazing and controlled burning to keep encroaching forests from taking over important prairie habitats.

Mima Mounds Preserve has many native plants and a unique lichen, reindeer lichen!

Reindeer lichens species are usually more typically found in the high latitude boreal forest regions and are rare in inland valley habitats of the western states outside of Alaska.

Can you identify any of these native plants?

Visit this scientific paper to delve deeper into the reindeer lichen species found at Mima Mounds. 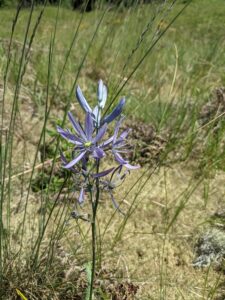 Prairies are important landscapes to native peoples across the continent. Native people harvested prairie plants for food, medicine and fiber.

The prairie supplied valuable food sources; roots and bulbs of the camas were dug, berries were picked and dried, acorns were harvested from the oak trees and processed, and grasses and other plants were harvested for fiber that was used for clothing and baskets. 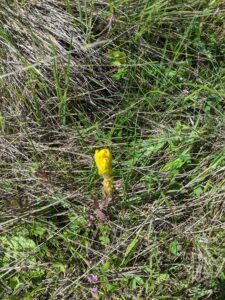 Spring is the most magical time on the prairie as the open grasslands’ flowers begin to bloom.

Can you see these flowers blooming? 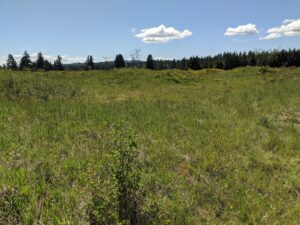 Prairies support a variety of plants and animals – some of which are listed as threatened or endangered under the federal Endangered Species Act. This rare ecosystem is home to many of Washington’s most imperiled species and is one of the state’s highest conservation priorities.

Can you list reasons why these species at risk of extension?

Do you know this animal?
I am a small gray – brown mammal belonging to the rodent family. I have long whiskers and chisel like front teeth. I like to live in well drained glacial soils, like prairies and I only eat plants. I live underground and make irregular soil mounds unlike a moles’ round mound. What am I? A mazama pocket gopher!

If you see me, please share your observation and provide a photo and exact coordinates when filling out the form. 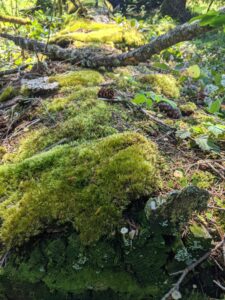 Did you know that moss is part of a group of non-vascular plants called bryophytes? Bryophytes like moss like damp shady areas. Where would moss be found at Mima Mounds? In the surrounding forest!

Can you locate three different types off moss on the forested portion of the ADA Loop Trail?

Did you know that you can determine the age of the stair step moss by how many steps it has? One mossy frond step per year! 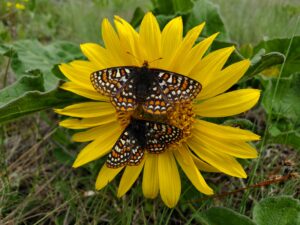 The prairie supports many colorful native butterflies that are attracted to the prairie wildflowers. Like all animals’ butterflies need three main things for survival, food, shelter and water.

Butterflies require a host plant for food for their caterpillars or larvae, flower nectar to feed adults and shelter for protection from wind and rain.

How many different types of butterflies can you find?

Some butterflies such as the Taylor checkerspot are endangered and only live in prairie habitat. There are only 8 populations found in Washington, 2 populations in Oregon and only one in British Columbia. Its decline is due to loss of open prairie grassland habitats.

Taylor checkerspot larvae are very particular about their food source and are found to only prefer a few plants found on the prairie.

When an animal species eats a limited diet, they are known as specialists compared to a generalist, which is an animal that feeds on a wide variety of things.

If you see this medium sized butterfly with its checkered brick red, black and cream colors, please share your observation and provide a photo and exact coordinates when filling out the form.

What is the best time to see butterflies? Mid-morning and mid-afternoon, spring through fall.

For a colorful Mima Mounds Butterfly Guide download this pdf. 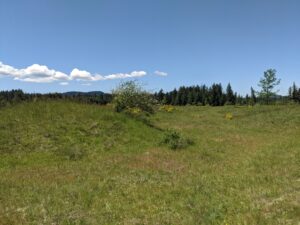 One of the concerns facing the health of prairie habitats is the introduction of non-native, invasive plants species. Species such as scotch broom have a devastating effect on prairie habitat and the wildlife that live there. Invasive species are non-native plants or animals that are difficult to control or eliminate and they out compete native plants-animals taking over native habitats.

For decades, groups such as Nature Conservancy and Center for Lands Management have been working to restore the biodiversity of Puget Sound prairies. With volunteer help they have been successful in controlling woody pest plants, like scotch broom and Douglas-fir. A range of tools are used and have been effective in controlling these species, including prescribed burning which is used as a primary tool to control scotch broom.

Can you locate scotch broom as you walk the trails? In spring, their brilliant yellow blossoms make it easier to identify.

Did you know? The seeds from the scotch broom plant can stay in the soil for up to 60 years! 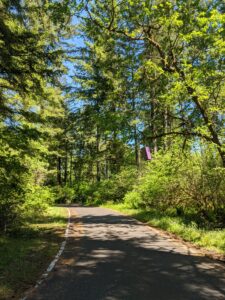 In spring you may find a large box kite like structure hanging from the trees as you leave the upper parking area.

What are these? Insect traps! Insect traps help scientists monitor insect species and disease in our forests.

You have completed your mission to find a prairie plant such as Garry oak, golden paintbrush, camas, serviceberry or reindeer lichen! Don’t forget to log in to the Goose Chase App and submit your photo for this mission to collect your park specific sticker!