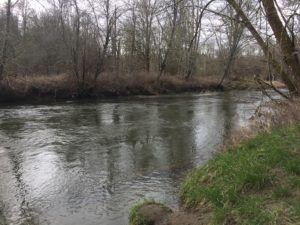 The Deschutes River flows from south Thurston County, northward, all the way to Puget Sound. Seek out the river and take a photo of the stream bank erosion along its banks.  Its sources include small spring-fed creeks in the Bald Hills, but, as it travels north, more and more tributaries join in to make it the large, often fast-flowing river you’ll see at Pioneer Park. The rivers headwater streams begin in Lewis County. Some of the river’s tributaries include Thurston Creek, Spurgeon Creek, and Chambers Creek.

Along the trail you’ll learn about the challenges and solutions people have discovered living along large rivers.

KNOW BEFORE YOU GO!

Print this handy mission checklist before you leave! 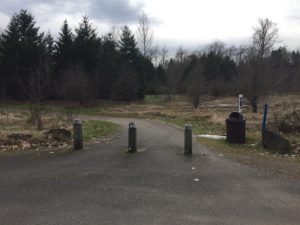 The river trail head is immediately to your left as you drive into the parking lot. Look for a young grove of Douglas fir trees as you walk to the river. Please stay on the main park trail. The side trail under the bridge is private property. Please do not trespass.

How do rivers naturally flow? See how wide and fast the river is flowing?
If rivers were allowed to naturally flow freely without the restraints of dikes and dams, they would take many twists and turns across the land as they wind down to the sea. This meandering is a very important part of river ecology. Few of the world’s rivers are free flowing.

Stream flows for the Deschutes River and all of our lowland South Sound streams are rain dominant. This means rain water is what determines their flows compared to other streams flow which are determined by snow depth. In winter and early spring, the Deschutes River has the deepest and fastest water. 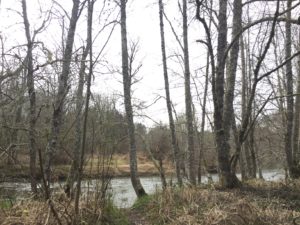 Taking the gravel path to your right, follow the river in the direction it is flowing.

Where do you think this river ends?
If you were to follow the river all the way to its end, you would flow into Capitol Lake and then through the dam and under the 5th Ave bridge in Olympia before joining with the salt water of Budd Inlet in Puget Sound!

Now look around and see if you can find the deciduous (leaf bearing) trees that live along the banks. These trees are mostly red alders and black cottonwoods. These trees don’t mind wet soil and are often found growing along streams and rivers. They provide much needed shade for the stream, habitat for birds, insects and other wildlife to live and nutrients for the soil.

Note!
At some point, likely during the land’s farming history or perhaps after a major flood, rivers  bank was built up with rip-rap. Rip rap are large boulders that are place along the “toe” of the rivers bank to form a levee to keep high water from spreading over the banks. Such a construction project would have removed all the existing plants. The first plants to colonize the newly-disturbed area, besides the alders and cottonwoods, were non-native plants which are able to out-compete native shrubs and groundcover. This new “understory” unfortunately does not provide the best shelter or food for our local birds, mammals, and other wildlife. 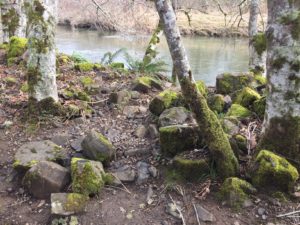 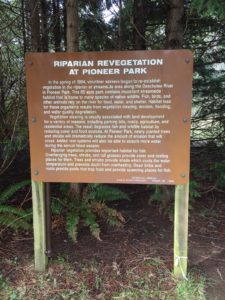 Look for a large sign and read about the Eagle Scout’s restoration project.

What kind of wildlife would make their home in this habitat? Keep your eyes and ears open for evidence of birds singing, garter snakes sunning and the scurry small mammals!
Many bird species, garter snakes, mice, racoons, butterflies and also deer can be found living here.

What is a riparian area?
Riparian areas are lands that occur along watercourses and water bodies. They are distinctly different from surrounding lands because of unique soil and vegetation that are strongly influenced by the presence of water.

Trees and shrubs along streams are very important as they help retain stream banks protecting from erosion, slowing down flooding and providing shade, to keep the river cool. Vegetated areas along streams and rivers are called riparian zones. 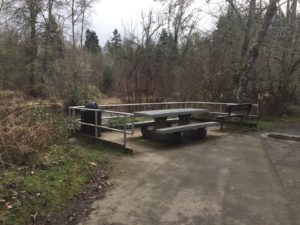 When you come to a junction with a paved path, you will turn right and proceed back towards the parking lot, keeping to the left on the paved path. You can check out the stream bank near the picnic table.

Can you find something manmade on the riverbank?
The large rock wall along the riverbank is called rip rap. On banks where the vegetation has been removed manmade rock walls are installed, called rip rap. Rip rap is used to slow down bank erosion. When the force of the high water hits the rock it bounces off instead of scraping away the soil. 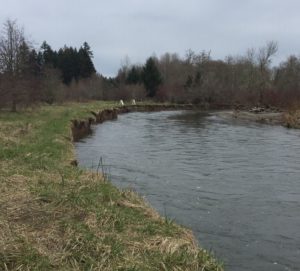 Back to the River

Near the parking lot, turn left at the wide gravel path, then keep straight. Keep straight at the life jacket sign.

When you arrive back at the river, look up and downstream. Do you see a place where the riverbanks are falling in? Stay away from the bank as the river is swift and deep here!
If the banks of the Deschutes River did not have its native trees and shrubs removed in the past, this erosion would likely not be as bad as it is today. The roots of the plants would have held the soil, and the overhanging foliage would have buffered the force of the water. That’s why many eroding bank sites today are undergoing restoration with native plants by landowners, local agencies, non-profits, and a lot of volunteers.

What happened to the native shrubs and groundcover that used to grow along the Deschutes?
Human activities, like farming, likely removed the trees that once grew along these banks. Once the trees were removed, the river banks became easier to erode and fall in during flooding. Trees help slow down flood water and their roots hang on to the soils in the banks slowing down erosion.

Erosion is a natural part of a functioning stream system which does so in its own time, naturally. Erosion is a process that takes the rock and gravel out of the stream banks and delivers it into the stream bed for fish to use for spawning.

Sometimes when humans interfere by removing trees from the stream banks, erosion happens much faster making the water very muddy and cutting the banks far wider than it would of been naturally.

This would be a good spot for planting trees for restoration!

You have completed your mission to take a photo of the stream bank erosion along the Deschutes River! Don’t forget to login to the Goose Chase App and submit your photo for this mission to collect your park specific sticker and be entered to win cool prizes! 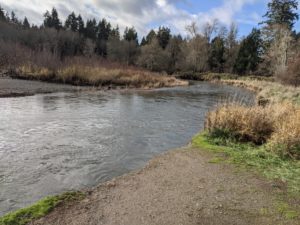 Continue to follow the path and at the gravel intersection, turn right. Retrace your steps to return to the parking lot.